Trash polka tattoo is a name for a tattooing style that has been around more than 20 years, which makes it a relatively recent tattoo style.

These tattoo designs seem like literal splatters or images, shapes, forms and words in a typewriter font, which adds to their mystery and the fact that they are trying to confuse the viewer as to what actually is going on in the tattoo.

Trash polka tattoo designs are dubbed as confusingly beautiful, used to express multiple ideas and themes in a seemingly discombobulated and yet unified design.

The juxtaposition, the mixing of bold and fine lines, dots, geometry, heavy color, and dramatic realism can tell a big story, encompassing all the facets of one’s life.

So, let’s dive in and see how we can bring you this amazing tattoo art closer to heart!

They are German natives Simone Plaff and Volko Merschky from Buena Vista Tattoo Club in a town in Bavaria in 1998.

These artists themselves describe their brainchild as a combination of realism and trash.

It is a collage that brings together:

The original name of the style was ‘Realistic Trash Polka’. The breakdown of the name was that

Later on they dropped the realistic out of the name, citing that they wouldn’t want to put on strict rules on the tattoo.

Before they started tattooing, Merschky has studied interior design and his colleague Pfaff graphic design. As hobbies they also paint, do photography and play music.

The dynamic duo are known to have broken the stereotypes of the classic German tattoo style.

Merschky and Pfaff also mixed bold and fine black lines with grey shading and dramatic splatters of red, that are full in color, unlike in watercolor tattoos.

As explained in the introduction, the trash polka tattoo style does not make sense easily and seems like a collage of completely unrelated elements.

This can mean that trash polka tattoos can include common tattoo elements such as realistic roses, wolves, lions, and many other animals, flowers, and movie characters.

This style is a combination of “realism and trash; the nature and the abstract; technology and humanity; past, present and future; opposites that they are trying to urge into a creative dance to harmony and rhythm in tune with the body”.

To put it bluntly, the main characteristics of trash polka tattoos is a mix of naturalistic, surrealistic, photorealistic motifs with graphic, lettering and calligraphic elements in mainly black and red.

These pieces also focus on photo-realistic images or commonly portraits coming from cinema, fashion and horror movies. Next to them are graphic elements such as large black and red areas, brush strokes, paint stains, and geometric or abstract shapes.

A realistic trash polka tattoo utilizes so called dissociative imagery-pictures of things that may not directly relate to each other.

The effect of it is clear – to weaken the apparent meaning behind the imagery in the tattoo and thus weaken the relationship between the tattoo itself and the person wearing it.

The majority of original trash polka geometric tattoo pieces are done as large scale tattoos in order to suit the motifs and elements, similarly to tribal tattoos.

Breaking down the meaning of trash polka tattoos is no easy feat.

These tattoos definitely express emotions, and strong feelings upon seeing the design.

The founding duo says that the “trash” part means everything beyond the realistic:

The elements above awake strong reaction to this tattoo style.

Some messages conveyed with a trash polka tattoo are:

To some these tattoos produce a weird effect, either admiration or disgust.

This art form challenges the usual glamorous art, acting as a sort of rebellion to the established norms.

Rage is seen very loud and visible emotion in this tattoo style.

Another layer is the portrayal of honesty, its brutality, as well as passion.

How To Take Care Of Trash Polka Tattoos

Trash Polka style tattoos are designed to be fresh as in just finished, as the gloss of a fresh tattoo is another element of the trash polka tattoos.

For that reason, it’s especially important to take good care of them and make sure they are covered and hydrated.

For all tattoos there is a usual tattoo healing timeline that you should be aware of.

Apart from that, there are some other factors to consider, too:

Finally, the quality in the execution of the tattoo is the most important element. All of these and more play into the longevity of a tattoo.

How Will Trash Polka Tattoos Age?

Red and black ink are the  trademark colors of Trash Polka, and the bad news is – they are notorious for fading.

Regardless, both colors are often used in tattoos that tend to hold up well to aging, especially in the traditional American tattoo style as well as Japanese Irezumi style.

Given that trash polka has been around for only 20 years, there is no exact data gathered yet on how they will age.

It is widely discussed in the tattoo community that the aging process will be especially hard on trash polka tattoos, particularly if they are in areas that get a lot of exposure to the sun.

The dark black that you always see in trash polka tattoos will evidently be greyer in a few years, possibly changing the overall look of the tattoo.

This means that you will probably have to consider and count on regular touch-ups.

What is The Best Trash Polka Tattoo Placement?

As said before, trash polka tattoo design call for a large-sized canvas.

To fit all the splashes, dots, lines (thick and thin), as well as portraits, and give them the space to heal well and keep their longevity, anything smaller than medium will add another layer of challenge to this already complex designs.

That said, a trash polka tattoo sleeve is a common choice, more often than not it being a half sleeve on the upper arm.

If you’re looking to have more of a flat and wide area for this tattoo, you should consider trash polka chest tattoo.

This placement gives it another layer of passion and emotion, as it comes “straight from the heart”

To help you with your research for your next tattoo design, below you will find our best trash polka tattoo ideas from our tattoo guides.

Click on the headline to learn more about each tattoo symbol.

Are you looking for a custom trash polka tattoo design? We got you. 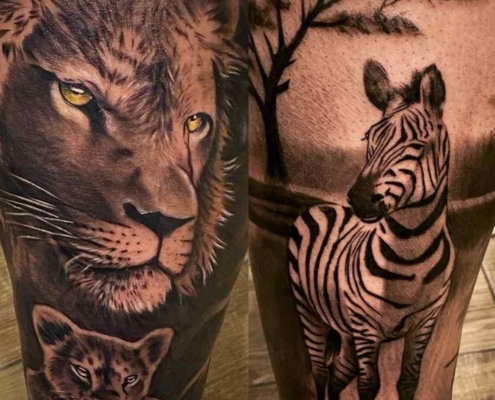