Incredible Ship Tattoo Ideas And What They Mean - Tattoo Stylist

Incredible Ship Tattoo Ideas And What They Mean

In 21st century ship tattoo designs are not just a thing of sailors. Their symbolic meanings can be found in almost all cultures, as they are deeply ingrained in human consciousness.

Ships represent man-made creation in the natural world of oceans, seas and rivers, a vehicle that is set to conquer the unpredictable environment that huge bodies of water offer.

The act of navigating far out with a ship, going on a quest to see what lies beyond the horizon represent the journeys that have either literal (for sailors) or metaphoric (ones who’ve been through a lot) meaning for many people.

When it comes to marine tattoos, the ship is one of the pillar elements amongst them, especially among men’s tattoos.

Ready to learn more about the symbolism of ship tattoo? Let’s sail away!

Every Tattoo Has A Story – Ship Tattoo Meaning

Ship stories are almost always mythic in structure and this includes stories of shipwrecks. In mythic stories, a character either goes on a journey (or stays in one place), meets a variety of allies and foes, has some kind of big revelation (Anagnorisis) then returns home (or finds a new one) as a changed person.

But even before that, sailing ships have been around for millennia, of which we’ve learned through the old mythology stories.

The sea is one of humanity’s oldest metaphors for life, and a sea journey has often stood for our journey through life.

Those journeys entail many phases – the smooth sailing, the storms, and sometimes even the shipwrecks.

Part of the journey are the animals, both real as well as the monsters, that are aboard.

Through all of these, we can see the symbolism of the ships, some as explained on this website:

We also have sailors to thank for the popularization of the tattoos in the mid 20th century, as the Sailor Jerry tattoo style was put in trend by them.

In Christianity the ship has been a long standing symbol of safety, faith, journey and the Kingdom of Christ and his followers.

Many times it’s also used to represent the church itself, as the central seating area of the church is called the Nave (Latin for ship).

Also, the ship is the Church tossed on the sea of disbelief, worldliness, and persecution but finally reaching safe harbor with its cargo of human souls.

The Noah’s ark during the flood (1 Peter 3:20-21) and the story of Jesus protecting Peter and his apostles on the stormy Sea of Galilee (Mark 4:35-41) are the main stories where ships play the central role as the vehicle for Christians.

It was also a great symbol during times when Christians needed to disguise the cross, since the ship’s mast forms a cross in many of its depictions.

A fishing boat might represent the Kingdom of Christ and his followers, as Jesus told his disciples to “follow me and I will make you fishers of men”.

When researching ship tattoos, the most common are medium or large tattoo designs to give the grand look of the ship space for all the details.

Of course, there are many amazing micro realistic examples of small ship tattoo designs, neatly fitting on the forearm, or even tucked away on the chest.

Where ship tattoos shine best is in large tattoo scenes.

That’s why ship tattoo sleeves, or even ship back tattoos are common.

To depict a ship on the sea, with all its details, or a shipwreck tattoo, it requires place to give all the parts space.

To help you with your research for your next tattoo design, we went on a hunt through Instagram to find the best ship tattoo ideas.

Ship In A Bottle Tattoo

Are you looking for a custom ship tattoo design? We got you. 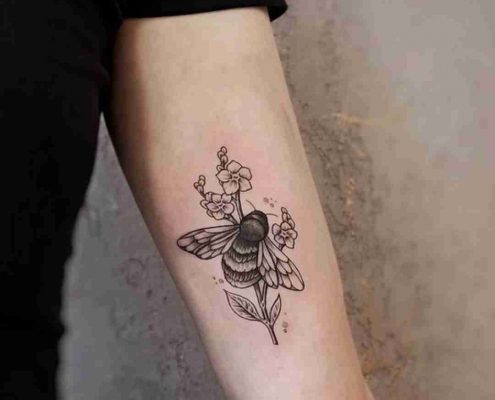